Help Chapman's Dachshund Rescue Save More Doxies
Contribute
Campaign extended! Our deadline has passed but you can still help. ✕

No thanks
Help Chapman's Dachshund Rescue Save More Doxies
✖
Gallery (3) 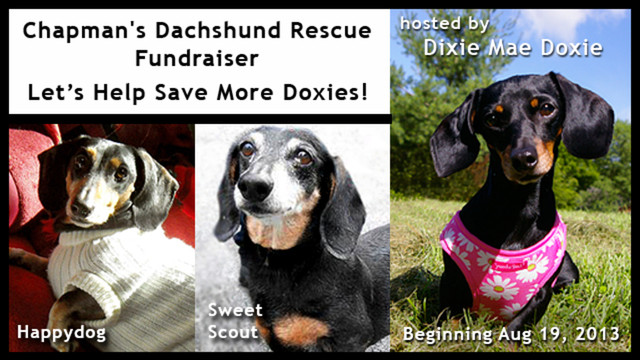 By Jenny Lewis
Are you friends?
Personal campaign Keep it all
Rock Hill, SC, US

This fundraiser was created to help a wonderful Dachshund rescue who has saved and adopted out many Dachshunds over the years. They go out of their way to save as many as they can, and ensure the dogs have medical care, vaccinations and everything they could possibly need. Chapman’s Dachshund Rescue in York, SC needs our help! NO DONATION IS TOO SMALL!!
Here is the story that inspired this fundraiser:
Dixie Mae Doxie was rescued from being a puppy mill Momma and taken in by Chapman’s Dachshund Rescue in January, 2013. On February 9, 2013, Dixie’s new Mommy visited the rescue, fell in love with Dixie, and adopted her, giving Dixie a wonderful new home with a senior Dachshund brother named Happydog and two sisters named Peanut & Pixel. Ten days later, Dixie’s beloved Dachshund brother Happydog passed away, just a few days before his 15th birthday. Since that time, Dixie & her Mom have been raising awareness about puppy mills, senior dogs & highlighting the wonderful rescue that saved her.
On Dixie Mae’s 6 month “Adoptaversary”, Dixie & her Momma helped save a 16 year old abandoned dachshund named "Scout." Many others got involved, and in the end, Scout was taken in by “Aunt Gina” Chapman, the founder of Chapman's Dachshund Rescue. Dixie & her Momma were so happy, and felt led to start a fundraiser for Chapman’s Dachshund Rescue so they could help others like Scout.
“Chapman’s Dachshund Rescue Fundraiser” is a celebration of Scout's rescue, and in honor of Dixie’s beloved 15 yr old brother Happydog, who went to the Rainbow Bridge February 19, 2013. So, for Happydog, for Scout, and for all weenie dogs who deserve a good home, YOU ARE INVITED!! Please share this with all your friends, and let's save more doxies!
Activity highlights See all44
NEW Thank you emails can now be sent directly from the Transactions page.
Alternatively you can still leave a comment here.

Jenny Lewis hasn't posted any updates yet.
Newest | Oldest
Show more
NEW Thank you emails can now be sent directly from the Transactions page.
Alternatively you can still leave a comment here.

Jenny Lewis is managing the funds for this campaign. The campaign is for a personal cause.