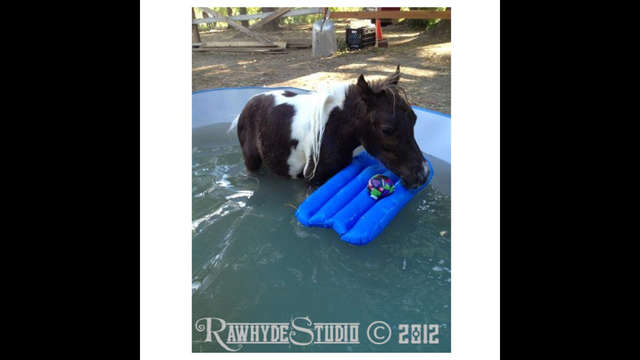 He is VERY loved and cared for just as
if he didn't have a disability. His disability has added so much character to his already spunky self. He was born April 14th, 2011. He was born with what they call "windswept" legs due to his position while in the womb. He also had severe angular limb deformities and tendon laxity on all 4 legs. The complications with his legs were only one of many, many challenges he has faced in his very short life. (He is almost 15 mos now 7/2012).

This is Roozer's Story. A story about a horse that continues to prove that he knows he has a reason to be here. He doesn't give up or get frustrated with the challenges of everyday life, he has learned to compromise and if one way doesn't work, then another will.


When Roo was born, due to his tendon laxity and his apparent dysmaturity, he could stand, but not up enough or long enough to nurse from mom.

I hand milked mom and fed Roozer via a bottle for the first 24-48 hours. He would stand and nurse on occasion, but not long enough to really get what was needed. After working endless hours with my regular and wonderful vet on numerous attempts at establishing a way to support his tendon laxity. I was wanting a way for Roozer to get support, but that didn't require surgery this early in his life. (many thanks to Dr. Martin and Dr. Brisbane)

I loaded Roozer into the FRONT seat of my car....yes.. Ford Focus..and away we went to the specialized equine facility Wilhite and Frees in Peculiar, MO.

He was evaluated by Dr. Chris Wilhite and then seen by Ed Reardon, farrier.(An absolutely fabulous and fantasitc equine hospital ran by the most compassionate staff)

The consult resulted in radiograph analysis and then manufacturing and application of specialized shoes.

Within a week... He was up sooo much more and beginning to straighten out....All seemed going so well! Yeah...!

One week later, I noticed his right side of his scrotum was larger. Upon palpation, assessed that he had a loop of bowel that had herniated into his scrotum. Consulted with Dr. Wilhite and stated that we could do 2 options, wait and see or do surgery to correct and make sure all was ok.

The discomfort was causing complications with urination. He was taken into emergency surgery (with a small animal vet at a small animal clinic due to his small stature and the equine hospital's gas anesthesia machine's size not able to provide him the appropriate length and re-breathing apparatus.)

He had hernia and castration surgery on a Saturday morning at 1am. Surgery went well. Up and recovering 15 min post surgery. Due to his small stature and the normal swelling that goes along with surgery, he began to have difficulty urninating on his own.

We started on a course of antibiotics and NSAIDS to help. He began getting back to normal, eating, drinking, moving as usual. No discharge from surgical site etc. All the meanwhile, he is getting his legs tended to daily and doing passive ROM for physical therapy to help keep the joints from being stiff.

Went for follow up to vet, they ultrasounded the surgery site, found pocket of fluid/abscess in his groin area. Due to his fragile state, we had to quickly drive home, pack the truck, hook up the trailer and get mom and Roo down to the University of Missouri Veterinary Hospital. Roo was on the line of either everything is going to be fine or he could take a turn for the worse.

They kept him and mom for almost 2 weeks. He received IV antibiotics 4 x a day with NSAIDS to help with swelling and pain. They did endoscopy due to his dysmaturity of nerve function. They discovered that he was having some nerve laxity in his larynx. This would cause milk that he was nursnig from mom, to run out of his nose. (Not a good thing.. he was a high risk for aspiration pneumonia...considered a death sentence in foals) So the surgeon said that we could wait and see how he progresses because she said she hasn't had to work on a miniature this small or with this diverse of problems all at once. I opted for the "wait and see" approach.

Good news... He has gained complete control of his larynx and no longer has the swallowing, breathing and eating coordination problems....

Christine Clark is managing the funds for this campaign. The campaign is for a personal cause.