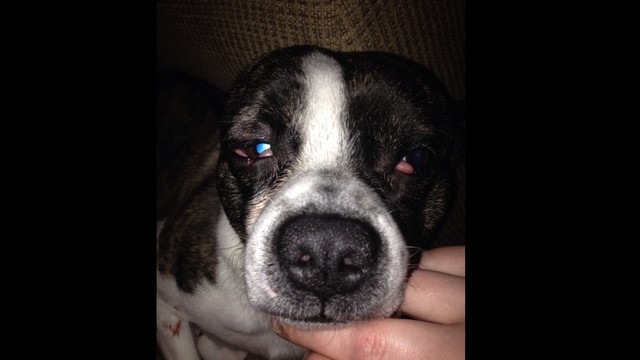 Tiffany Groves & Samuel Monette are stuck in a Catch-22.

Monday evening her dog, a three-year-old Boston Terrier-Papilion mix named Milo, was attacked by her neighbour's dog (a pitbull, she says) outside their apartment complex.

“(Milo) had gone to the back to go to the bathroom, and that's when it all started. Her dog was chasing mine to the front yard because he was trying to get away. By the time I got out the side door to see what was going on, they were already in the front.

“Her dog had my dog's whole head in its mouth. My husband had to run outside and punch the dog in the head, because it's the only thing that would make him let go. My dog has a messed up eye, he's got bite marks right through the skin. I had to pick him up and bring him inside the house and hose him down to find out where the bleeding was coming from.”

It's beyond her budget to pay what will certainly be a costly vet bill all at once, Groves says. Four vets have told her they don't accept payment arrangements. The Farley Foundation, a charity to help low-income pet owners in emergency situations, can't help because Milo doesn't have a regular veterinarian. She applied, and was rejected for, financing to cover the bill.

Milo made it through the night but is in a lot of pain, says Groves.

“He's limping around a little bit. He's not that active. He's usually a very active dog. On his leg where he has the lacerations, he's babying it. You touch it and he'll bring it up, showing you that it hurts,” and there's a cut on his eye as well.

The one clinic in the area Groves says accepts payment arrangements is too far to get to (she doesn't have a car).

“Maybe (vets) would accept payment plans, especially in emergency situations,” she says, explaining why she contacted The Star to tell her story. “Maybe not in everyday situations, but emergency situations. People spend their money on their bills, they go about their daily lives. When something like this happens you are not prepared for spending between $1,800 and $2,500.”

Rainbow District Animal Shelter manager Richard Paquette confirmed Tuesday the owner of the other dog has been charged.

“We have laid a charge under the bylaw for permitting a dog to attack and we are trying to work under the Dog Owners' Liability Act to (get her to) surrender the dog to us.

“It's very unfortunate circumstance when something like this happens. We're working to resolve it and the case is still under investigation.” Tiffany Mae Monette hasn't posted any updates yet.
Newest | Oldest
Show more
NEW Thank you emails can now be sent directly from the Transactions page.
Alternatively you can still leave a comment here.

Tiffany Mae Monette is managing the funds for this campaign. The campaign is for a personal cause.