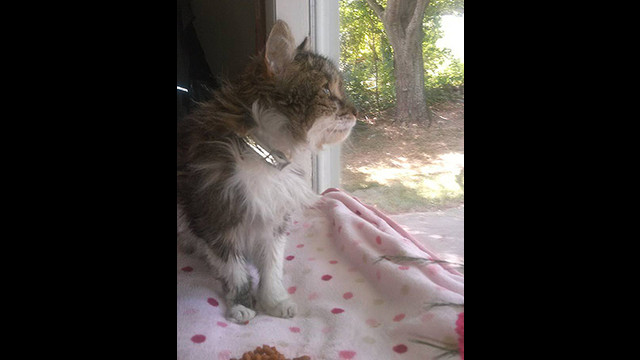 $752 raised
31 contributors
6 Years running
Contribute
By Kimberly Panzarella
Are you friends?
Personal campaign Keep it all
Leominster, MA, US

On September 2nd, 2013, I received a private message regarding an injured cat Found on Jungle Road in Leominster in very bad shape.

They contacted animal control but were told that due to a commitment that had a higher precedence he (Animal Control) would not be able to make it there for a couple hours and would likely end up putting the cat down.

The wonderful individual Ashley Peters picked up the kitty and bought her a large crate, some blankets and food while she anxiously looked for someone to help and was terrified of the thought of this poor cat being killed without having been seen by a vet and given a chance.

After much correspondence, coordination and team work we were able to get her in to see a Vet on 9/4/2013. Thank you Jennifer Bellrose for getting her in on such short notice.

She’s very sweet. Very small and is estimated to be less than 1 & 1/2 years old. With the proper care, a healthy diet and some TLC, this little beauty will be given the chance to live a happy life with a loving family which is what we all want for her.

See all activity34
NEW Thank you emails can now be sent directly from the Transactions page.
Alternatively you can still leave a comment here. Kimberly Panzarella is managing the funds for this campaign. The campaign is for a personal cause.