Thank you everybody. Our campaign is now over. ✕
Help Lee fight their case!
SubscribeUnsubscribe
✖
Gallery (1) 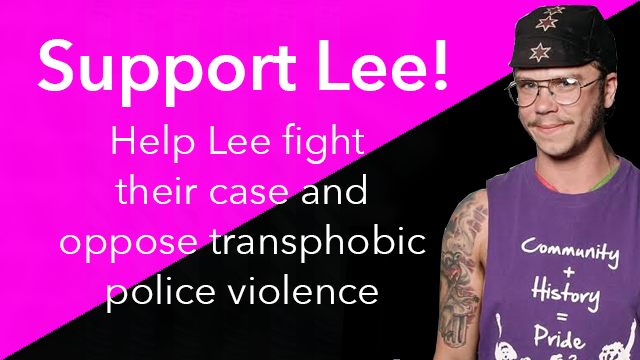 On Saturday, August 12, 2017, Chicago Police arrested Lee Dewey at the Chicago Slutwalk march. Lee, who is non-binary, is facing felony charges based on false accusations of biting a police officer. These false charges are based on transphobia and HIV stigma.

What Happened at the Slutwalk Demonstration

On Saturday, August 12, 2017, Lee Dewey (they/them) was exercising their Constitutional rights to freedom of speech and assembly while participating in the 2017  Slutwalk Chicago  march. Slutwalk’s mission is to end rape culture. Part of Slutwalk’s messaging is that perpetrators of sexual assault always bear the full responsibility for sexual violence, and that survivors are never to blame. In that spirit, Lee and many others were dressed in “revealing" outfits as a way to reject the idea that a victim’s clothing is ever an invitation for sexual assault.

Toward the end of the march, Chicago police officers on the scene arrested three organizers and placed them in a police wagon. The dozens of remaining participants, including Lee, were demanding that the police release their friends. Suddenly, police moved in, and Lee fell to the ground. Their bicycle fell on top of them on the sidewalk, and a Chicago Police Commander and other Chicago Police Officers charged toward them. While Lee was on the ground, Chicago Police Officer McNaughton stepped on Lee's head and ground it into the pavement. Lee was handcuffed and taken to the 18th District Police Station.

How Lee Was Treated by Chicago Police and Lee’s Charges

As a result of their rough arrest, Lee sustained several injuries, including an open cut across their thigh. At the station, Lee alerted several police officers to their cut and asked for bandages so they could tend to themselves. Out of an abundance of caution and care for the safety of everyone, Lee informed those CPD officers that they were HIV+.

After Lee shared their HIV status, they were forcibly taken to Presence St. Joseph’s Hospital—despite the fact they did not consent to or desire such medical treatment. At the hospital, Lee was confronted by a CPD officer and a medical professional who demanded that Lee consent to have their blood taken. They told Lee that a CPD officer was claiming Lee bit their ankle and that there was video footage of the incident. Lee denied then and continues to deny that they bit anyone, but felt coerced to give their consent to having their blood withdrawn because of their HIV+ status.

While in Chicago Police custody, Lee, who is gender non-conforming, was repeatedly asked about their gender identity in a hostile and demeaning manner by CPD officers.

Lee was subjected to similar transphobic and hostile attitudes from Cook County Sheriff’s staff both before and during bond court the next day. In bond court, the Assistant Cook County State’s Attorney unnecessarily revealed Lee’s HIV+ status as a way to stigmatize Lee in front of the judge, the public, and on the court record. Lee was given a $100,000 D-bond that was clearly intended to keep Lee in Cook County Jail. Luckily,  Chicago Community Bond Fund  immediately posted the $10,000 needed to release Lee, and they were released within a few hours after never having been fully processed into the jail.

Lee was the only person arrested at Slutwalk 2017 who was charged with felonies. All of the other individuals who were arrested were charged with misdemeanors, and their cases were resolved quickly and with only fines or community service.

The Criminal Proceedings and Evidence

In the course of the criminal proceedings, Lee’s defense counsel has obtained copies of the body camera videos that were worn by several Chicago Police Officers at the Slutwalk demonstration. Not a single video corroborates the criminal charges against Lee. Instead, the videos demonstrate that Lee did not bite Officer McNaughton or attempt to bite any officer at the demonstration.

While Lee was also charged with attempted assault for allegedly trying to bite a Chicago Police Commander, the Commander is recorded on body camera video as saying that Lee did not try to bite him, directly refuting this accusation.

In addition, the videos document that Officer McNaughton only alleged Lee bit him after the he learned of Lee’s HIV status. On three different occasions recorded by the body cameras, Officers at the demonstration asked Officer McNaughton if he was OK. Officer McNaughton never indicated Lee had bitten him and, in fact, reported each of the three times that he was “OK” and “Alright.”

Lee is Being Punished as a Queer, Positive Person

Lee is unfortunately not the first queer person to be falsely charged with biting a Chicago Police officer. In 1991, Gary Lawman participated in an  ACT UP  demonstration in Chicago during the annual convention of the American Medical Association. Gary and several other activists were brutally attacked and arrested by members of the CPD during the protest. After Gary sustained a broken nose, a gash requiring stitches above his eye, and cracked ribs, Chicago Police Officers  falsely accused him of biting a CPD officer . The Cook County State’s Attorney’s Office (CCSAO) sought and then withdrew a request for a court order to draw Gary’s blood. Eventually, the charges were dismissed, and Gary successfully sued the CPD for his injuries.

The charges against Lee and Gary are part of a longstanding and disturbing pattern in which queer, gender non-conforming, and transgender people and people with HIV/AIDS are presumptively and falsely framed as malicious and vindictive spreaders of disease. In fact, Lee’s lead attorney Joey Mogul co-authored an entire book about the criminalization of LGBT people along with co-authors Andrea Ritchie and Kay Whitlock.  Queer (In)Justice  documents how homophobic and transphobic prejudice pervades law enforcement practice and leads to public stigmatization and false charges, prosecution, and punishment.

Lee is a Beloved Member of Many Chicago Communities

Lee is an accountant, community organizer, and beloved member of many transgender, gender non-conforming, and justice-minded communities in Chicago. They give so much of their time, labor, and energy to caring for and supporting others. Lee is the lead organizer for  CommunityCave Chicago , a peer-led group for individuals that were assigned/designated female at birth but who identify as trans or not cisgender to meet and build community in safe space. Lee is also the treasurer of the board of  Upswing Advocates , a research-focused organization that provides mentoring and other services to LGBTQIA people, and on the community advisory board of the  AIDS Foundation of Chicago . Lee also created a  Gender Affirming Loans Product  package at the North Side Community Federal Credit Union to help trans people pay for expenses related to surgeries, procedures, and other costs associated with their transition.

What Can Happen If Lee Is Convicted

Lee is facing a Class 2 felony aggravated battery charge and Class 4 felony resisting arrest charge. If Lee were to be wrongfully convicted of Aggravated Battery, they could be sentenced to serve three to seven years in prison. If Lee were wrongfully convicted of Resisting Arrest, they could be sentenced to one to three years in prison.

What You Can Do

We are also asking people call Cook County State’s Attorney Kim Foxx’s office and request that her office drop the criminal charges against Lee. Calls can be made to 312-603-1880.

We are also asking you to contribute to Lee’s defense fund. Lee is being represented by Joey Mogul and Brad Thomson of People’s Law Office . In order to mount an effective defense, Lee’s lawyers, legal workers, and defense team have already attended numerous court dates and will continue to attend many more. They are continuing to conduct an extensive investigation and may have to hire an expert to debunk the state’s so-called evidence of biting. The legal team is prepared to take the case to trial if the State’s Attorney insists on continuing to pursue these false felony charges. In addition, Lee has been forced to pay for the medical expenses incurred when Chicago Police took them to the hospital against their will.  Your contributions will support Lee’s legal defense and any expenses they incur from these legal proceedings.

William Pekoc is managing the funds for this campaign. The campaign is for a personal cause.