Jeff Noble for Michigan House
Contribute
Campaign extended! Our deadline has passed but you can still help. ✕

No thanks
Jeff Noble for Michigan House
✖
Gallery (2)

Jeff Noble was born to a working class family in Wilmington, Ohio. Jeff graduated from Francis Marion College in 1984, where he met Myra Kay Rhodes. The two were married on February 28th, 1987, and began to pursue their own American dream.

Their family grew with the arrival of three daughters: Taylor, Brittany, and Brooke. After working in management, purchasing, and sales, Jeff answered the call to full-time ministry.

In 1993, the Noble family sold their home and most of their possessions and headed to Wake Forest, N.C. and the Southeastern Baptist Theological Seminary where Jeff graduated with a Master of Divinity degree in 1996.

Jeff is a husband of almost 30 years, a father, and a grandfather. He is a servant of God, his family, and the people of his congregation. Jeff Noble is once again answering the call; this time to serve the people of the 20th district as their Representative in the Michigan legislature. 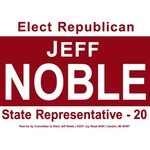 Committee to Elect Jeff Noble hasn't posted any updates yet.
Newest | Oldest
Show more
NEW Thank you emails can now be sent directly from the Transactions page.
Alternatively you can still leave a comment here.

Committee to Elect Jeff Noble is managing the funds for this campaign.