Thank you everybody. Our campaign is now over. ✕
2015 Ride to Give • Wheels on Fire for Connor
SubscribeUnsubscribe
✖
Gallery (1) 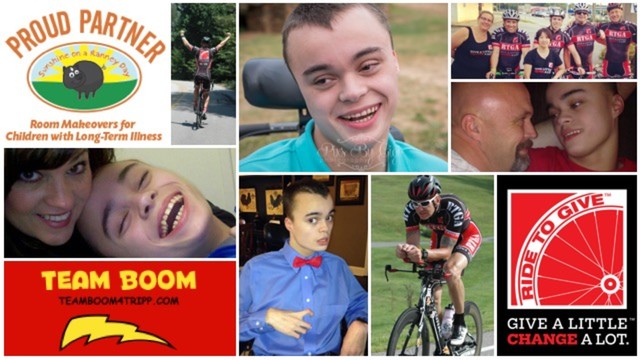 On July 5-11, twelve time Ironman Dave Nazaroff, in partnership with Sunshine on a Ranney Day and Team Boom, will embark on the third annual "Ride to Give" from Nyack, NY to Jefferson, GA to benefit the Bode family. Here is their story:

There are people that come into your life at just the right time and seem truly Heaven sent. They provide the support you long for and give you the strength you desprately need to keep pushing forward. One random evening at Zumba class, Martie Bode introduced herself to Stacy Halstead of Tripp Halstead Updates. Martie has spent the last 16 years on the same road Stacy was just beginning and that chance meeting in the fall of 2013 changed not only the Halstead’s journey but that of Beats for Braden and Do It For Hawk as well. After becoming fast friends, these mothers and fathers have bonded over their amazing children and all that comes with raising a child who needs extra love and round the clock care. Stacy Halstead reached out to Ride to Give personally to help this amazing family and we are proud to make them our 2015 Ride to Give cause.

Newly married Martie and Connrad Bode of Jefferson, GA were so excited to welcome their baby Connor into their family. They enjoyed every newborn moment with their son and felt beyond blessed. When Connor just 5 months old, a relative noticed that he was not visually tracking like she thought he should be at that age. Since birth, Connor had preferred his right side, and after some research, his parents thought he could possibly have a condition called Torticollis.They had not expected it to be much of anything but needed to reach out to a specialist just to be sure.

They decided to consult with a Neurologist who performed a number of testes including a CAT scan and diagnosed Connor with Schizencephaly. This was 16 years ago in July 1999.

The cause of Schizencephaly is unknown, and various theories exist as to the when and where the defect in development occurs. Early injury to the brain during the first trimester of pregnancy has been thought to cause the characteristic clefts. These clefts may be due to infection, poor blood flow causing stroke, or genetic abnormalities. In Connor’s case, his parents have no idea where his Schizencephaly originated from and were completely blindsided by his diagnosis. Connor has the worst case scenario of Schizencephaly, Bilateral Open-Lip, which usually involves seizure activity. After 15 years with no seizures, Connor suffered his first few seizures this Spring, adding to the complexity of his medical situation.

Connor also has Cerebral Palsy, is non-verbal, non-ambulatory, vision impaired, hearing impaired, tube-fed and incontinent. He also has severe reflux and sensory integration dysfunction disorder. In his 16 years he has had numerous surgeries, including inguinal hernia repair surgery, two undescended testis surgeries, multiple ear tube surgeries, two g-tube surgeries, valgus de-rotational osteotomy surgery (hip surgery), hamstring and abductor lengthening surgery, and multiple Botox, phenol and steroid injections. It has been quite a complex journey and Connor has had his parents support every step of the way.

There are still many medical issues that have to be monitored closely and may involve future surgeries. Because of Connor’s re-occurring strep throat and drainage issues, his parents are in the process of scheduling a tonsillectomy and adenoidectomy for later this summer. Since Connor has CP he is at risk for severe scoliosis. Connor is closely monitored for the abnormal curvature in his back. He is x-rayed annually and his Orthopedist could potentially perform spine fusion in the future. Depending on Connor’s spasticity, he could require additional hip surgeries and additional muscle lengthening surgeries. Connor does have hydrocephalus (increased pressure due to fluid accumulation inside the brain) but his fluid does not require a shunt at this time, but shunt surgery is always a possibility. Due to Connor’s reflux and frequent vomiting, he is closely monitored by a GI Specialist. He could require a fundoplication surgery in the future.

Since Connor’s diagnosis at 5 months old, Martie and Connrad have always felt very honored to be Connor’s parents. The struggles and challenges have been real and exhausting, but the accomplishments and progress have been over-the-top rewarding and fulfilling.

Getting through each day takes a lot of passion, faith, hope & strength. Connor is a very special young man. He is a bright light and his smile and demeanor are contagious. He loves playing musical instruments, playing challenge league baseball, bowling & camping with his family. His favorite movie character is Bear in the Big Blue House and he enjoys watching NASCAR! Connor communicates using sounds, gestures & reaching for what he wants. He is such a happy boy and is always smiling, squealing and flirting!

Connor's dad is a volunteer firefighter, and it is much easier for the Bodes to give support to others than accept it for themselves. Even though they both work full time, they realize they cannot afford to give Connor everything that he needs, such as durable medical equipment, therapy services, and specific products for special-needs children which are rarely covered by insurance and can devastate a family’s finances. That's where we come in!

Ride to Rive is excited to partner again with Sunshine on a Ranney Day and Team Boom to provide Connor with a very special home modification and room makeover. Currently Connor weighs 120 lbs and is almost 6ft tall. It is very difficult for his parents to lift him into his shower chair, wheel-chair and into his hospital bed. His current bathroom is not handicap accessible, and he has already outgrown the limited space. SOARD will expand the bathroom and widen Connor's bedroom doorways to handicap-accessible width. A track system from his bedroom to the new bathroom will be installed providing ease and safety when his parents transfer him from room to room. Then, SOARD will continue to work their magic and give Connor a stunning firefighter themed bedroom.

Please join us on another epic "Ride to Give" to benefit this amazing family who provide guidance to so many other special needs families. Let’s show them what it feels like to be on the receiving end of the Ride to Give Army's care and support!