No thanks
Paying it Forward: Sammy's Story
✖
Gallery (3) 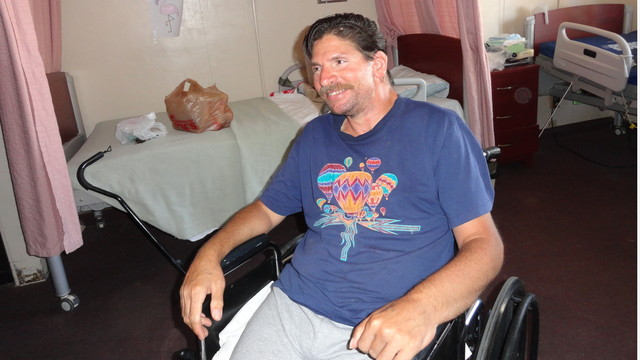 Sammy and I both have a TBI resulting from prolonged comas. When I met Sammy, I was still in a wheelchair, and Sammy could walk aided by a cane. He encouraged me, and to this day, I can walk on a cane on good days! I use that skill now to go see Sammy every month and pay his share of cost at a long term care facility.

Sammy is a 57 year old family friend. He was in a coma 25 years ago, and has been paralyzed since. With the tenacity of a bulldog, he got himself around, until 6 years ago he fell and broke his spine.

I fought for 10 years to visit Sammy each week, and see that he was OK. During those years, he deteriorated until he could no longer move or transfer into a wheelchair.

I also fought to get him placed on our states Adult Long Term Care System, so he could get help... in the form of Intense physical Therapy, Occupational Therapy, and to re-learn all of the skills he had prior to the fall he took 6 years back.
I was successful, and I now have gotten Sammy into a Rehabilitation Facility.
Sammy is on SSI, and 90% of  his limited income is now owed to this Nursing Home monthly as his "share of cost", leaving him with $92 a month for his personal needs.
When Sammy was carried off by the ParaMedics, he had been sitting in one spot for 5 years, and the condition of his rented apartment got bad. He was never charged a deposit, and he left his possesions behind. The apartment complex sued Sammy... now in a Nursing Home for $2500 for removal of his property, and for cleaning and painting the place. They won their suit, and have made it so they get $80 of Sammy's leftover $92 each month.
Sammy uses his $12 in vending machines in the Nursing Home. His one luxury, and piece of freedom.
They encourage residents to wear clothing, but Sammy has only a Hospital Gown.
I am seeking these funds, to get Sammy clothing, shoes, and personal grooming items, as well as letting Sammy have funds to pay the on-call barber to cut his hair.
These things that we will help Sammy with will restore a small amount of dignity to a guy who is feeling pretty helpless right now.
It will give him the will to fight harder, so that he can progress to assisted living (same finacial obligations), and finally he would be able to get an apartment again, at which time, without having to pay the Nursing Home his "share of cost", he will get to keep his SSI check, and the Long Term Care System will then provide him home visits/care at NO cost.
I hope you will help me get Sammy into a better position to improve his life.
Thanks for reading.

Vitolo DelVecchio is managing the funds for this campaign. The campaign is for a personal cause.