Please help us pay Callie's ER bill.
Contribute
Campaign extended! Our deadline has passed but you can still help. ✕

No thanks
Please help us pay Callie's ER bill.
✖
Gallery (1) 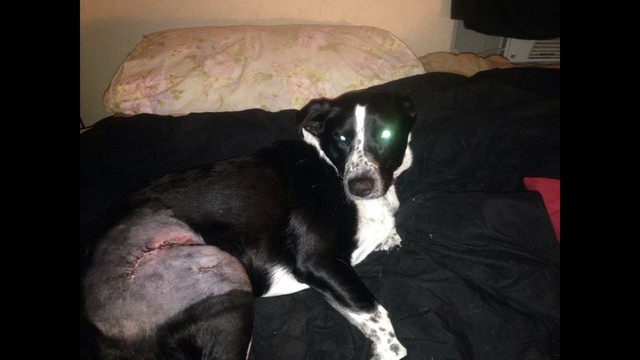 $425 raised 21% of $2k goal
11 contributors
4 Years running
Contribute
By Kiernan Daugherty
Are you friends?
Personal campaign Keep it all
Cincinnati, OH, US

Cheryl loves dogs, and is a huge advocate for rescue, adoption and pit bull awareness. She has four dogs, all rescues and adoptions. One of those is a three-year old Border Collie/Heeler named Callie whom Cheryl adopted from a rescue group that saved her from wandering alone on the streets at 8 weeks of age. Cheryl has had her since the first day she was posted for adoption by the group. In July of 2013, after what should have been a routine spay, Cheryl found Callie the morning after her spay surgery panting hard, her body rigid and stiff, eyes glassy and unable to move. Cheryl rushed her to the ER Vet where it was determined there was massive internal bleeding and immediate surgery was required. After the surgery, in which the vet found that the original surgical sites had not been properly sutured causing the internal bleeding and hypovolemic shock, Callie experienced neurological deficits in both rear paws causing her to walk with her toes folded under. The right paw corrected within a day, but the left never fully corrected and became lacerated from the way she was walking. Cheryl got a doggie boot in an attempt to protect it but it would never fully heal. Eventually, it was realized through a neurological specialist, that Callie had limited sensation in that paw. Cheryl came home one afternoon to discover Callie had chewed off three of her toes, despite that Callie was in an e-collar, the paw securely wrapped with a boot covering it. Border Collies are known to be Houdini-dogs. Despite best efforts at saving Callie’s paw, and after several differences of veterinarian opinions, Cheryl was forced to have the leg amputated. Although traumatic, Callie has adapted to having only three legs very well. Surgeries to save Callie’s life and the eventual amputation cost close to $10,000. This past week, on Tuesday, March 16, Cheryl let all the dogs outside, shut the back door and within a minute heard Callie scream. She ran out to check on what was wrong and discovered Callie struggling to walk and a huge open wound on her rear hindquarter. Hysterical, Cheryl rushed her to the vet completely clueless as to what had happened. Surgery to repair and close the wound was performed and Callie stayed overnight in the ER going to her primary veterinarian the next day for post-op care. Three layers of skin had to be stitched and there was some mild muscle damage that the vet says should heal. Cheryl’s worst fear is losing Callie due to a problem with her only remaining rear leg. Callie’s home now, but Cheryl is facing another stressful time due to these bills which are approaching $2,000 and payable within 30 days. Cheryl is unemployed and on disability. She lives with a family member but has been putting in the effort to return to her typical work as an Executive Assistant. This is a financial hardship and burden that is adding stress to an already stressful time. Cheryl loves all her dogs dearly, but Callie is special because she has already been through so much and was permanently handicapped already. Now, with this new injury to her remaining rear leg and the costs associated with surgery and care, the stress is becoming insurmountable. We are hoping to assist with these vet expenses of approximately $2,000. Callie is the sweetest dog, with the best cuddles and having already had a rough start and veterinary malpractice on a routine, responsible surgery, Cheryl really only wants the best for her, always has wanted the best for all her dogs, who are all like her children now that her own children are grown. Please help if you can. Any amount helps. Cheryl’s goal is to eventually repay those who donate once she’s working again. If you aren’t able to donate, please share and ask your friends to share. We need all the help we can get.

Activity highlights See all11
NEW Thank you emails can now be sent directly from the Transactions page.
Alternatively you can still leave a comment here.

Kiernan Daugherty hasn't posted any updates yet.
Newest | Oldest
Show more
NEW Thank you emails can now be sent directly from the Transactions page.
Alternatively you can still leave a comment here.

Kiernan Daugherty is managing the funds for this campaign. The campaign is for a personal cause.