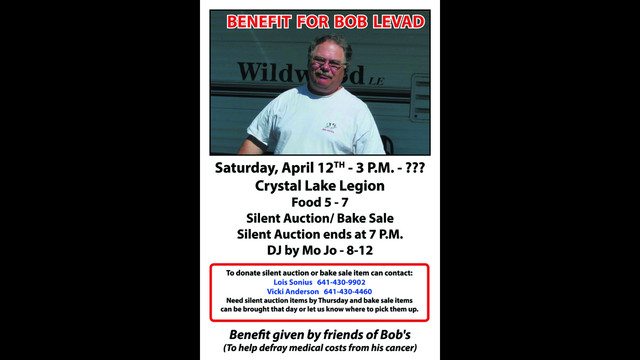 By Mary Lovstad
Are you friends?
Personal campaign Keep it all
Forest City, IA, US

It's been over a year and a half since Bob found out that he had esophageal cancer with metastases to his liver. He was in a drug trial for ramucirumab given in conjunction with oxaliplatin and fluorouracil for almost a year and had a very good first response to the treatment. It became less effective early this year and he was switched to a Taxol and carboplatin chemotherapy and also had a course of radiation to help shrink the esophageal tumor.

Early this December,he latest CT scans showed that this second course of chemo was losing its initial effectiveness and has also been adversely affecting he blood counts.

The week before Christmas, he started my third course of chemo, which was also found to be not effective and Bob suffered some small strokes in February and had a "Gama Knife" treatment to remove a small tumor in his brain causing some of these issues.

Bob is just 58 years old with one son in college and one still in high school and has recently taken medical leave. Raising a family is expensive without additional medical costs and many, many trips to Mayo in Rochester.

His friends are having a benefit to help him defray some of these costs. Mary Lovstad is managing the funds for this campaign. The campaign is for a personal cause.