Thank you everybody. Our campaign is now over. ✕
Ruby & Misty need your help to get to America!!!
SubscribeUnsubscribe
✖
Gallery (10) 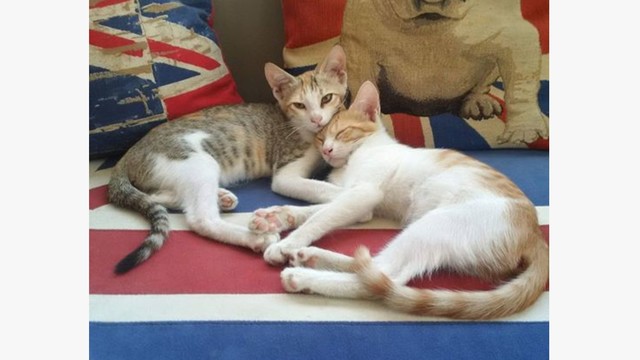 They had been living under a car, outside a supermarket for two weeks and wouldn't move because people were feeding them scraps as they left. Despite this, they were miserable and struggling healthwise breathing in fumes all day on a VERY busy road in Dubai.

Their rescuer had monitored them for a couple of weeks and decided it was time to remove them, before their shelter (car) moved...which it did the following day!

Ruby & Misty are Arabian Mau's which is a registered breed but in Dubai they are simply seen as 'street cats' and often treated as vermin :(

Long story short, animal welfare is not a priority there and rehoming them in a very transient country could have proved to be just a short term solution. Relocating Mau's is also not an easy option. Their rescuer decided to ask for the help of a very famous cat page in America, Cole & Marmalade. Their Daddy offered to help by sharing their story , he has been incredible, not a moments hesitation :)

Soooooo..... on the the 20th December, Ruby & Misty will fly to their furever home in Tampa Bay, Florida. WOW :D

All we need to do now is to raise some funds to get them there. Most of it will be covered by their rescuer and adoptive family but that still leaves around $700...can you help?

Faye Marie Hollands-Meadows is managing the funds for this campaign. The campaign is for a personal cause.