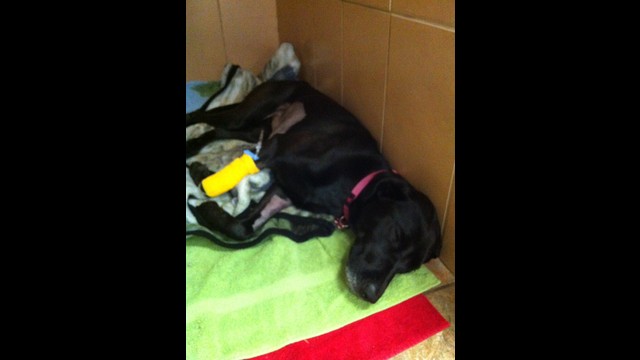 My sweet pup Lucy is only 2 1/2 years old and has undergone some serious health issues in the past 6 weeks.  I need help to pay for the vet bills.

Lucy is really sick after having to have 2 surgeries.  The first one was to remove a portion of a tennis ball that had lodged in her intestine, poking a hole through.  This created a terrible infection in her body cavity. After that was repaired, she started to get better, but very quickly fell ill again.  After many tests at the vet, they decided they had to open her up again, finding that the intestine had been damaged in a different area, due to the edge of the ball scaping it's way down her intestine.  The doctors had to cut a portion of her intestine out, as it was so infected and diseased.  Whew! I think - at least that's all over and she's going to get better now.  But she didn't.  She completely lost her appetite and her energy causing a lot of concern.  Blood tests and a culture test showed that she had somehow contracted E coli.  Another emergency situation to get her onto an anti-biotic that the bacteria is not resistant to.

Lucy seems to be recovering quite well, but is not out of the woods as the anti-biotic was damaging her kidneys, and they had to take her off it.  We are keeping our fingers crossed that the two days of dosage will have killed the E coli.  If not?  I'm not sure what happens next, as this anti-biotic is no longer an option.

I'm requesting help to pay for the vet bills.  They will amount to about $8000.  It's been 6 weeks of worry, stress and of course, financial distress.  Any little bit will help, and I thank you in advance for your compassion.

Joan Melville hasn't posted any updates yet.
Newest | Oldest
Show more
NEW Thank you emails can now be sent directly from the Transactions page.
Alternatively you can still leave a comment here.

Joan Melville is managing the funds for this campaign. The campaign is for a personal cause.