Campaign extended! Our deadline has passed but you can still help. ✕
✕
AAngel Casey would like you to see Meet the President to discuss veteran's causes
Please contribute now 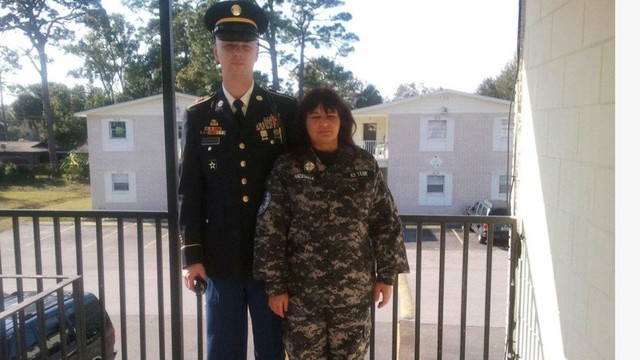 It only takes a spark to start the fire, and our veterans deserve the largest bonfire of all.   My goal is to meet President Donald Trump. I would like to raise enough money and recognition to meet him.  I'm asking the American people to stand beside me.  My goal is to talk to him about veterans and veteran's issues.  Some may say there are others more qualified to do so but who better then the spouse of an American Veteran. I have been there from the war to the tragedy to the medical and homeless part. I have been there through most things others could only fathom in their nightmares.  From sadness to grief to the struggles that they and their families have gone through. How children are affected when their father or mother are gone for so long and come back not the same.
I'm not doing this for fame or fortune.  I not looking for my "15 minutes" or anything of the sort. I'd like the chance to sit down and talk to him about things that some don't have the first hand knowledge of.  I believe I can make a difference no matter how small and I'd like the chance to do so. I have been told many times I can make a difference. So please help me make that difference. Help me get the attention I need  and money to meet him.

Charlie Chaplin said it best when he wrote.

The way of life can be free and beautiful.

But we have lost the way.

Greed has poisoned men’s souls – has barricaded the world with hate; has goose-stepped us into misery and bloodshed.

We have developed speed but we have shut ourselves in: machinery that gives abundance has left us in want. Our knowledge has made us cynical, our cleverness hard and unkind. We think too much and feel too little: More than machinery we need humanity; More than cleverness we need kindness and gentleness. Without these qualities, life will be violent and all will be lost.

The aeroplane and the radio have brought us closer together. The very nature of these inventions cries out for the goodness in men, cries out for universal brotherhood for the unity of us all. Even now my voice is reaching millions throughout the world, millions of despairing men, women and little children, victims of a system that makes men torture and imprison innocent people. To those who can hear me I say “Do not despair”.

The misery that is now upon us is but the passing of greed, the bitterness of men who fear the way of human progress: the hate of men will pass and dictators die and the power they took from the people, will return to the people and so long as men die [now] liberty will never perish…

Soldiers – don’t give yourselves to brutes, men who despise you and enslave you – who regiment your lives, tell you what to do, what to think and what to feel, who drill you, diet you, treat you as cattle, as cannon fodder.

In the seventeenth chapter of Saint Luke it is written ” the kingdom of God is within man ” – not one man, nor a group of men – but in all men – in you, the people.

You the people have the power, the power to create machines, the power to create happiness. You the people have the power to make life free and beautiful, to make this life a wonderful adventure. Then in the name of democracy let’s use that power – let us all unite. Let us fight for a new world, a decent world that will give men a chance to work, that will give you the future and old age and security. By the promise of these things, brutes have risen to power, but they lie. They do not fulfil their promise, they never will. Dictators free themselves but they enslave the people. Now let us fight to fulfil that promise. Let us fight to free the world, to do away with national barriers, do away with greed, with hate and intolerance. Let us fight for a world of reason, a world where science and progress will lead to all men’s happiness.

Soldiers – in the name of democracy, let us all unite!

Catherine Mackowiak is managing the funds for this campaign. The campaign is for a personal cause.