Thank you everybody. Our campaign is now over. ✕
Help the Shadowcasters Network Stay Alive!
SubscribeUnsubscribe
✖
Gallery (2) 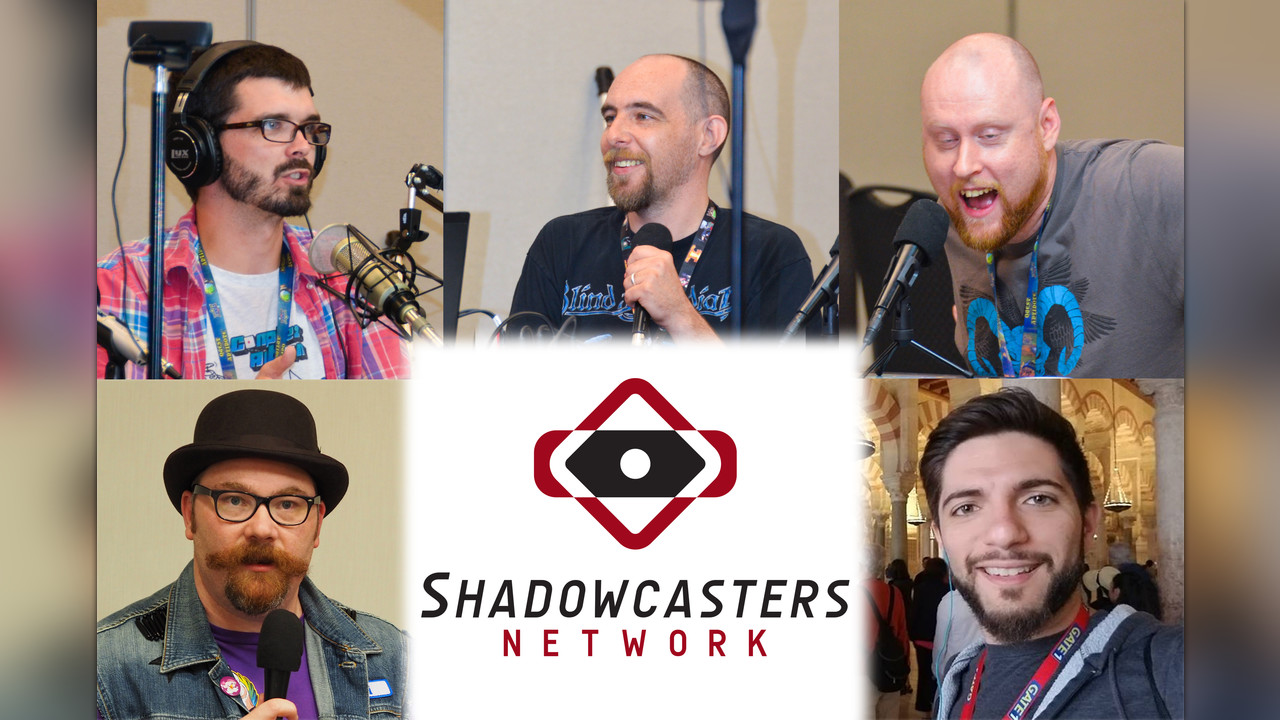 The  Shadowcasters Network     is a group of passionate geeks who love gaming and sharing that passion with everyone on the internet. Whether it's Tabletop RPGs, boardgames, or video games, we spend most of our time trying to figure out how we can show off the stuff we love playing, in the hopes that you'll love it too. We've got our popular  Shadorwun     content, include:  The Arcology Podcast, Neo-Anarchist Podcast ,  Tales From the Stuffer Shack , and  GM Screen , as well as an immensely popular  Shadowrun: Anarchy     live show called  Join the Anarchy . We've got the boardgaming smash-hit  Once Upon A Tabletop. We've got shows set in self-built and home-brewed TTRPG worlds  like Optiverse and Shattered Isles. And these are just the tip of the iceberg! Our lineup is growing and we've got more ideas that we're excited to try out!

What are we trying to do?

Our fans have been an integral part of how we are able to do business year after year. We've been able to be in business for 2 years now thanks to your generosity. Let's keep it going! We have more stuff we want to do! Let's do it together!

This year we were extremely fortunate to have been trusted by Catalyst Game Labs, the publishers of Shadowrun, to break the official announcement of the impending sixth edition of the Shadowrun tabletop RPG. Shadowrun is at the core of our genesis as a business, and it was a high honor to be allowed to break that news.

We do NOT plan to stop pumping out Shadowrun 6th Edition content, either. Through a live Actual Play show on our Twitch channel, we are showcasing the new rules and systems before anyone has a chance to get their hands on it. But that's not it! We are putting out:

Every chance we can get to give you information regarding the next exciting edition of Shadowrun.

Our online venue for playing officially sanctioned Shadowrun: Missions games has been a HUGE success in this past year! We plan on keeping that going stronger than ever. Whenever 6th Edition missions are available, we'll have them ready for you to play.

Last year we offered a MASSIVELY successful Shadowrun: Missions Online ticket bundle that we called the "Season Pass". Well, we're bringing it back again! During the Streamathon ONLY you'll be able to buy 6 Bundled Tickets for $20! That's a HUGE 33% discount. But they will only be available during our fundraiser!

Streaming content has become a big part of what we do here at the Shadowcasters Network, and we have plenty more of it coming to you!

But speaking of STREAMING... Our Summer FUNdraiser wouldn't be complete without the....

On    June 21st    we are bringing back our epic fundraising event over on our    Twitch channel. For 36 straight hours we will be streaming live content from the Shadowcasters and other friends of the network. We'll have things like:

If you thought it was fun last year, just wait! You'll not want to miss this chance to get involved in the action. We can't wait to interact with our fans for 36 straight hours! 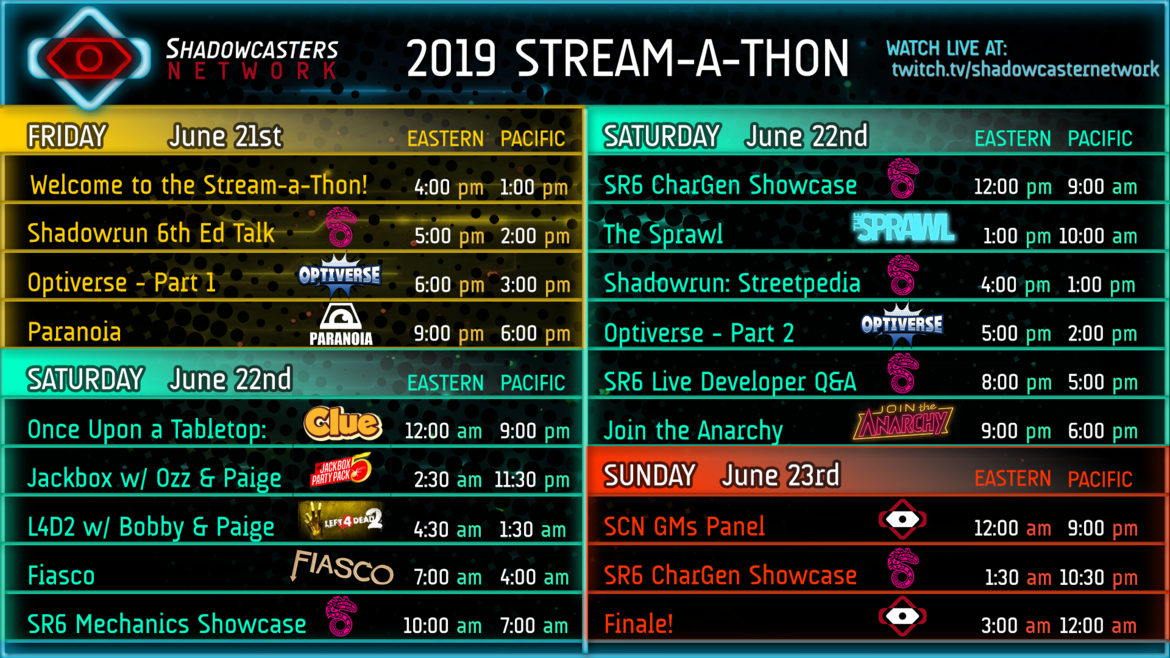 To make things fun, we've decided to add a few milestones into the mix. If we get to these numbers BEFORE the Stream-a-Thon starts on June 21st, then we'll deliver on these things...

There are a LOT of things we could use to improve what we do here at the network. So this year we've decided to add some Stretch Goals into the mix so that you know the EXTRA things we would be able to do for you and the network if you were so generous as to help us reach those goals!

We Need Your Help!

This company is quite literally kept in business by the generous support of our fans. We can't do it without your help. Check out the rest of the page, see the fun ways you can help out by donating, and we'll see you on the other side! 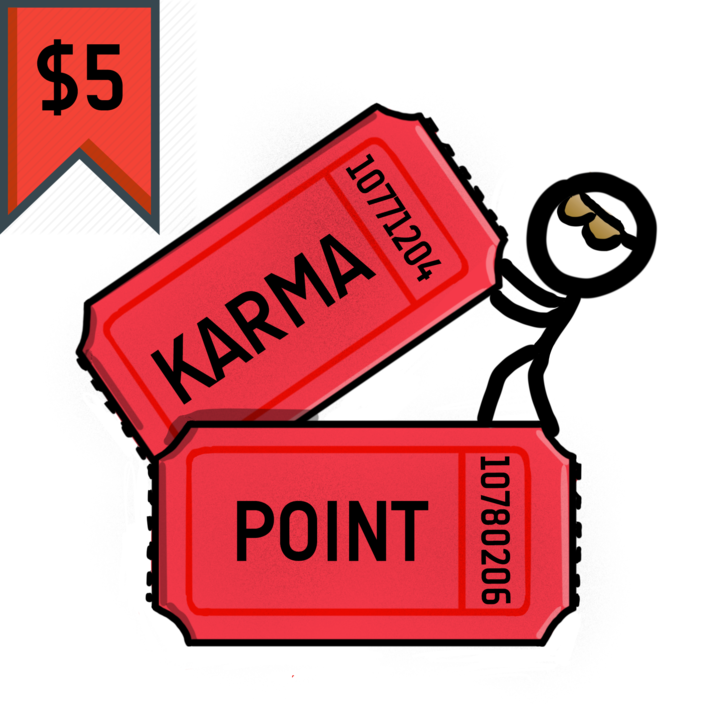 Get a chance to win cool stuff! Each ticket purchased enters your name into a drawing. The more you get, the better your chances of winning! You could win: -- SR6 Beginner Box Set -- Shadowrun PDFs -- Earthdawn PDFs -- And MUCH MORE!! Check the "More Info" link for a list of all the things we have to give away! Drawings will be held during our Stream-a-Thon from June 21st to 23rd. 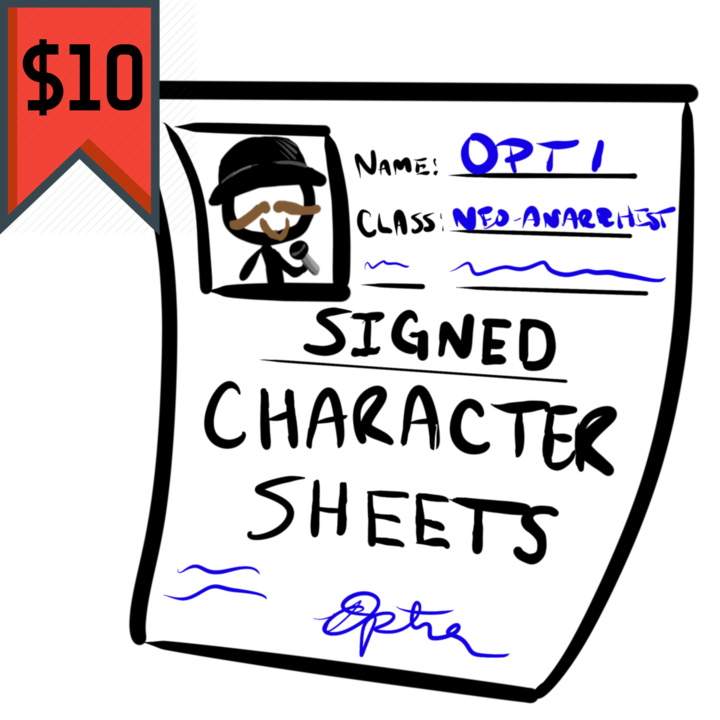 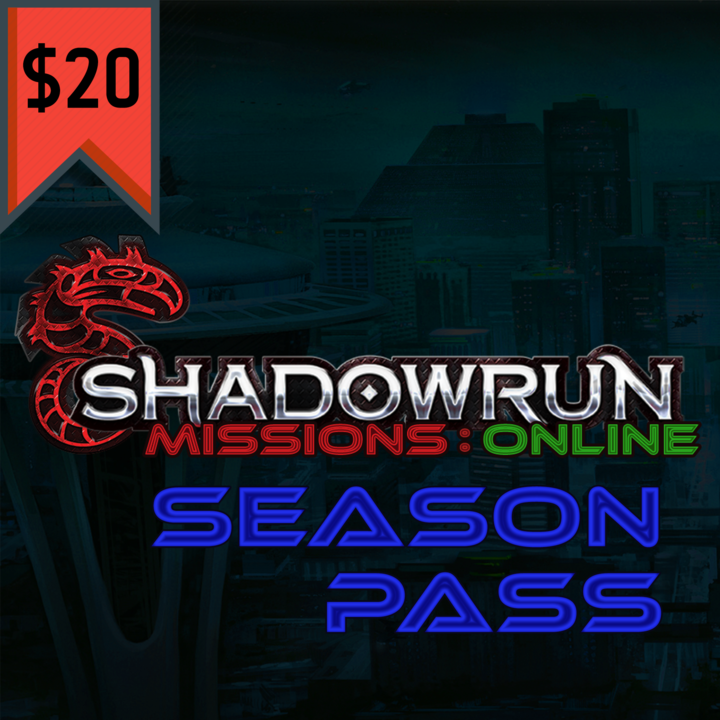 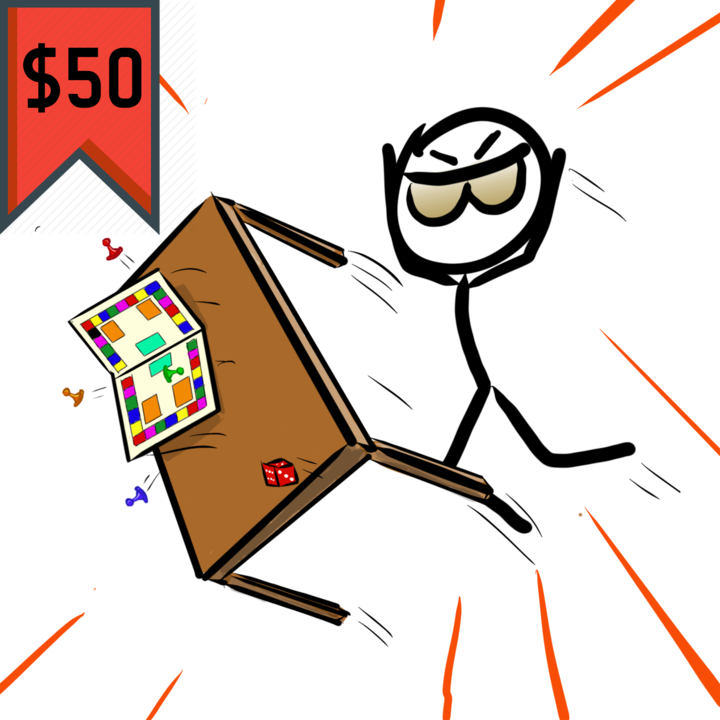 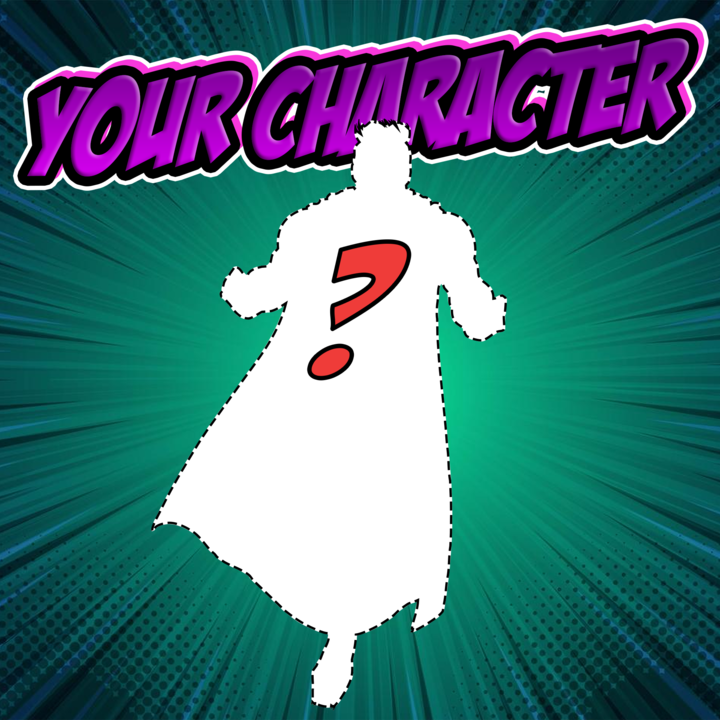 You and a group of your friends get a private game run by Opti! Opti will GM a private game of Mutants & Masterminds set in the Optiverse for you and your friends. EVEN BETTER THAN THAT you'll get a free piece of character art done for your character in comic style! AND your character will subsequently appear as an NPC in an official Optiverse episode! This package is obviously meant for our best and greatest and most generous fans! THANK YOU! 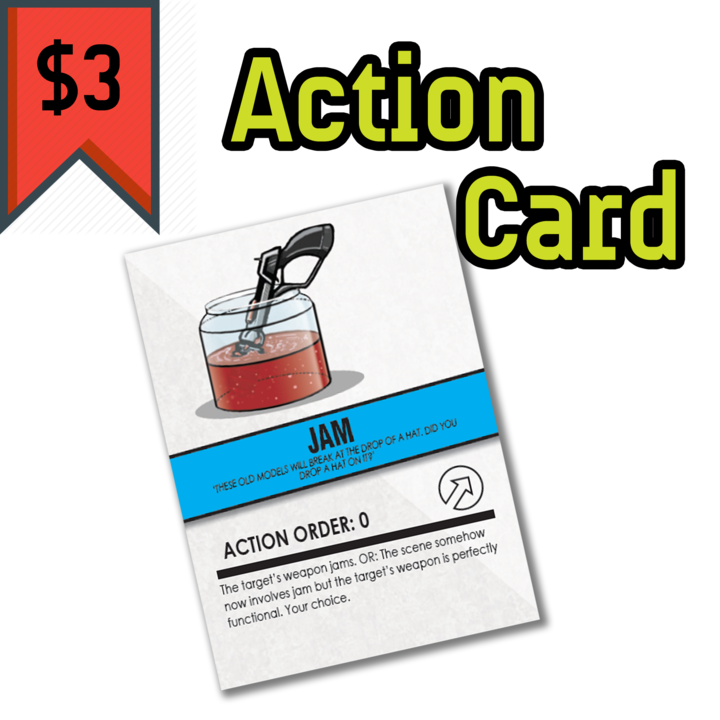 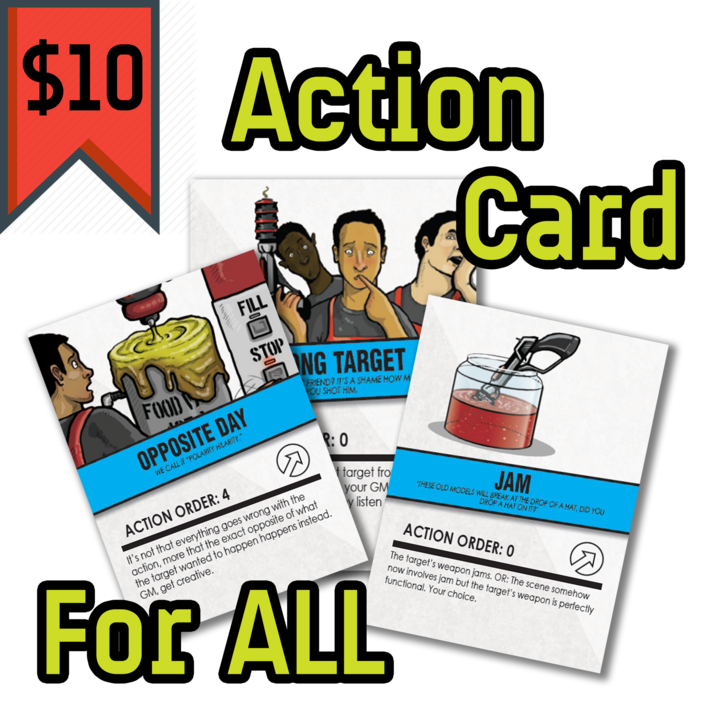 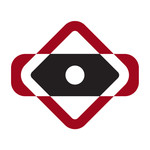 Shadowcasters Network is managing the funds for this campaign.