No thanks
Mandela was left in a box outside the shelter...
✖
Gallery (28) 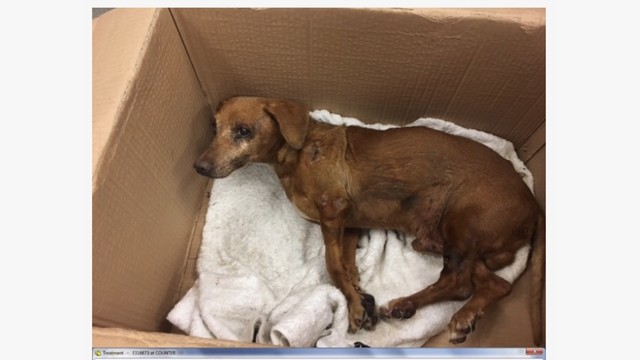 His intake photo was heartbreaking, but the words that came with it even more so...."Pet was left outside shelter in a cardboard box".  He presented not able to stand, body covered in injuries and contusions, and someone, someone who walks among us in society, had discarded him at some point overnight in a cardboard box outside the shelter, alone, and injured in the cold. He was a medical rescue and had until 4PM to find rescue. As soon as our Shelter Monitor volunteer saw him, we placed our hold and a transport transport was headed south to get him.

When our driver arrived at the shelter, they were whisked to the back, and were led to a bundle wrapped in a towel, in a cage, among others awaiting pickup.  He had been renamed Mandela, the name of a fighter, but we had no idea how prophetic that would prove to be.

The Rescue Office team member placed his limp body gently in the laundry basket and they were off, headed back north to LeadER, who was on standby awaiting the transport's arrival.

His fur was grimy to the touch, and his body was covered with scabs and scrapes and small open wounds, his face looked like it was swollen.  The wounds told a story, but we didn't know what that story was and why the injuries would be all over vs. one localized area.  Mandela rode to Broward without a sound, picking up his head only twice and upon arrival at LeadER, he was taken right to triage, to start his rescue journey and we hoped we were not too late.

President Pam arrived a few minutes after and met with the team in the back assessing Mandela, and after seeing it many times, the team at LeadER was able to make a likely guess as to the story of Mandela's injuries....he had likely been a bait dog.

Pam loved him, and hugged him, and told him everything was going to be ok, and Mandela was started on pain meds, x-rays to evaluate why he can't stand, wound care, antibiotics and bloodwork.

We are back again, to ask you to create a miracle and give hope and love where only a few short hours ago there was pain, cold, and loneliness.  Will you help us help Mandela?

See all activity445
NEW Thank you emails can now be sent directly from the Transactions page.
Alternatively you can still leave a comment here.